Evangeline had barely hit the first crossroads when she saw a familiar set of pigtails. Shauna did not look nearly as relaxed with the forest environment as Evangeline, and in fact seemed down right nervous. Titling her head, Evangeline wondered if maybe unlike Xavier and her, who had prior training and experiences growing up, if Shauna was the literal definition of a rookie, the first of her family to set out on a journey like this.

Okay, she could afford to be a little more patient. “Hey again, Shauna,” she greeted. “Fall behind?”

“Oh, hi!” Shauna jumped, turning around with a shaky smile. “Yeah, everyone else is up ahead. I just thought I would look around some, you know? Apparently a lot of people drop items around here, and there’s probably a lot of different types of Pokemon.”

Slowly nodding, Evangeline took a few steps forward to read a sign that said the same thing, and then, on a guess, started down the path to the left.

“Wait up, let’s walk together!” Shauna shouted, coming up behind her at full speed, bouncing a little to try and avoid running into Evangeline. “I feel like something will happen if I stay by you.”

Evangeline snorted. She knew what that meant. More like Shauna was hoping nothing bad would happen if they were together, or if it did, she was hoping that Evangeline would be able to get her out of it. Never mind that of the two of them, Shauna was the one wasn’t completely screwed if they ran into Grass types, which was pretty darn likely in a forest.

“I’ll heal your Pokemon whenever you want me to,” Shauna bribed, clapping her hands together in a pleading gesture. Her eyes grew big and wide, and her lower lip began to tremble.

If Evangeline had ever had any younger siblings or cousins growing up, such efforts would have been in vain. If she’d had much to do with younger children, she would have had at least enough for a token resistance. But she had been either in the watchful folds of her mother’s people or her father’s her entire life, and had private tutors rather than public schools. So she was completely unprepared for the effect of puppy-eyes.

With a sigh, Evangeline gestured for Shauna to follow her. “Come on, this way then,” she said.

“Yay!” Shauna squealed, and then plastered herself to Evangeline’s back.

It was hard to be afraid herself when someone was depending on her. Evangeline led the way down the meandering paths and tall grasses, finding items along the way. They reached a dead end, though, which meant turning around and going back to the crossroads.

And Evangeline stumbled to a stop at a rustle in the grass. “Oh no…” she breathed.

“What, what is it?” Shauna immediately put her hands on Evangeline’s shoulders to try and peer over the taller girl through a curtain of dark purple hair.

Out crawled a black and white, caterpillar type bug Pokemon. Evangeline barely heard her and Shauna’s Pokedex’s reciting in a creepy unison, “Scatterbug, the Scatterdust Pokemon. When under attack from bird Pokémon, it spews a poisonous black powder that causes paralysis on contact.”

“Oooh, are you going to catch it, Ladybird?” Shauna asked. “Can I watch you?”

No, no she wasn’t going to catch it. She fully intended to run and pray the bug was slow and couldn’t keep up with her. But taking a deep breath, she managed a nod. “Alright, Ella, let’s… Let’s catch a new friend,” she managed to squeak out.

The Zigzagoon zipped along the ground out of her ball, glancing over her shoulder at her trainer. “You okay?” she asked.

Evangeline managed a very weak smile. “I’ll be fine, go on,” she urged. The Scatterbug spewed out a stream of webbing–String Shot attack–and Ella had to focus on the fight, jumping out of the way.

It was a quick fight, especially with Ella’s speed. Closing her eyes, she threw the empty Pokeball, and covered her eyes with her hands as soon as it was gone. “Did it catch?” she asked Ella, unable to look.

“Yep,” Ella said, and she even went and fetched the ball for her. Reluctantly, Evangeline let the new Pokemon out. The little bug blinked up at her, sitting up straight.

With a swallow, Evangeline shakily patted the little feelers on top of its head. “H-hi,” she managed to squeak out.

“Hello,” the bug said. “Are you going to be my Trainer now?” She sounded dubious.

Evangeline felt dubious. “If you want. Would you like a nickname?”

“Yes.” The bug almost seemed to preen. “Something that suits me.”

Okay, that about made Evangeline giggle. Maybe this bug wouldn’t be so bad. She resigned herself to this, at least for now. “How about Cho?” she suggested. “It means Butterfly.”

The bug considered this with consideration. “Feminine, dainty, something to look forward to… I like it,” she pronounced with a nod of her head. 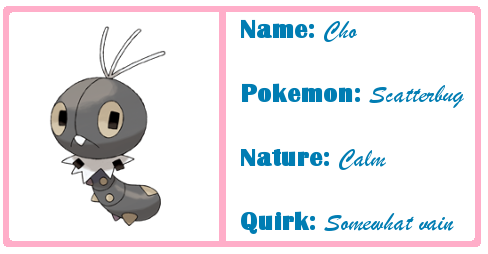 “Good, Cho it is,” Evangeline said. “And good job, Ella.” She held out both balls, returning both to her bag.

“That was really good,” Shauna said, clapping her hands. “You seemed really nervous, though.”

Evangeline grimaced. “I had an accident when I was little with a Bug-type,” she admitted as she led the way down the path towards the right path she hadn’t taken before. “If it has wings, I do okay, since I grew up with Flying-types around.” She pulled up the Pokedex and flipped through things. “I think Cho and I will be alright.” Tilting her screen, she let Shauna see the evolutionary chain of the Scatterdust Pokemon.

Shauna nodded seriously. “Well, thank you for letting me see someone else catch a Pokemon,” she said. “Xavier made it look so easy, and I felt pretty confident, and then we walked into here…”

“And it seems really different,” Evangeline said with a nod. “I know. But it’s okay to do things at your own pace, not mine or Xavier’s or anyone else’s, all right? And your Fennekin will help you too, even if you can’t understand what it’s saying. You can still work together.”

Shauna nodded, and Evangeline was relieved to see she was a little less nervous. It made the walk through the woods much more pleasant. They passed by Tierno and Trevor, one in the middle of a Pokemon battle of his own while the other waded through the tall class. Evangeline even thought she saw Xavier, but with his outfit, it was hard to spot him in all this greenery. She focused on her own fights, and Shauna even got brave enough to wander off on her own for a little bit, returning with some items someone had dropped along the way.

It was with a good bit of relief that Evangeline noticed the trees beginning to thin out and the road becoming straighter. The sun was beginning it’s descent, and she did not want to be stuck outside in the dark, at least not in an area crawling with more Bugs.

Shauna, though, made her pause and wait for the others to catch up. Xavier popped up first, looking surprised to see them. “So you’re the first to arrive,” he said, taking in the way Shauna was clinging and figuring out pretty quickly that it was Evangeline who had led them out. “Looks like my neighbor is someone with a lot of potential.” He cocked his hat back, looking at her with a sharper appreciation. She sniffed, tossing her hair over her shoulder. He was the idiot who had assumed she hadn’t known anything!

They were saved from any awkwardness by the arrival of Tierno and Trevor. Tierno barreled straight ahead of them in the path so he was front-and-center, spinning into some hip-hop inspired moves that were full of grace, almost in spite of his size. “The way Pokemon move, it’s just incredible!” he said, bouncing to a stop. “I want to show off some of that spirit when I dance.”

“Tierno…” Trevor sighed, obviously exasperated with his own travel partner. “Could you think about something besides how Pokemon move for once?” Tierno just shrugged sheepishly, unrepentant in his passion. Evangeline thought that was very brave of him.

“We’re all here!” Shauna said, some of her perkiness returning now that the whole group was together. But now it was a little more endearing to Evangeline, rather than being quite as surprising or grating. “Let’s go to Santalune City.”

There was nods of agreement, and as a group they continued to walk down the path together, the trees continuing to thin out and no tall grass to hamper the journey. “What are you all going to do?” Shauna asked to carry on the conversation. “Once we get to the city?”

“Why look for Pokemon of course.” Trevor’s tone was matter-of-fact, like the answer was obvious. Perhaps to him, it was. “The professor did ask us to complete the Pokedex, after all. And furthermore, different Pokemon prefer living in different places. To put it another way, it’s a chance to find different Pokemon than the ones in the forest.”

Tierno nodded, looking up towards the thinning canopy of leaves. “I’ll bet different Pokemon will use different moves. I sure want to see lots of moves.”

Not to mention it offers some coverage in different types of battles and situations, but if they weren’t thinking it, Evangeline wasn’t going to point it out right now. Maybe later. For all she knew, the types in Kalos weren’t as varied as her home region, and it was less of a concern. She’d find out as they went, and would mention it to Tierno and the others if it became relevant.

Shauna wasn’t daunted, though. “What are you going to do, Xavier?”

“I’m going to go to Santalune City’s Gym and challenge the Gym Leader.” Much like Trevor, Xavier was confident in his decision to go straight to the Gym. When he saw Shauna’s puzzled face, he added, “You see, Pokemon Trainers find out how good they really are by challenging the Leaders in Pokemon Gyms.”

“Wow, you sure know a lot.” Shauna pouted, obviously discouraged a little that she hadn’t known that.

“It’s because Mom and Dad taught me so much.” Xavier said dismissively. “Here, I have something for you guys: ‘Adventure Rules.’ I wrote down ten different trips every Trainer should know. If you are puzzled by something, try looking in these rules.” He handed copies to both Shauna and Evangeline. Glancing at it, Evangeline saw it wasn’t much different from the set of advice her father had given her, and she’d had weeks to study that. She shoved the notebook into her bag to avoid appearing rude by refusing the gift.

“Oh, this is great!” Shauna said, flipping through the pages avidly. When she finished, she clasped it to her chest. “I’m going to spend some time getting to know my Li’l Fenn. What are you going to do, Ladybird?”

Smiling, Evangeline shrugged. “Probably what Trevor and Xavier said. Looking for more Pokemon to round out my team a little more, and then take on the Gym. But first, I think I’ll head to the Pokemon Center. You did a great job keeping my team healed up in the forest, Shauna, but I think I’ll take the chance to spend the night in a bed.” She pointed out at the setting sun as it crested over the hill.

A spinner of yarns (of the story sort, though I do crochet...and sew, and learning to make armor...) END_OF_DOCUMENT_TOKEN_TO_BE_REPLACED
This entry was posted on Tuesday, November 7th, 2017 at 9:23 PM and tagged with Cho, Evangeline, NaNoWriMo, Nuzlocke, Pokemon X, Santalune Forest, Shauna, Tierno, Trevor, Xavier and posted in Nuzlocke. You can follow any responses to this entry through the RSS 2.0 feed.
« NaNo 17, Day 6: Route 2 and Enter Ella!
NaNo 17, Day 8: Route 3, 22, and Santalune City »